Game On as a Family 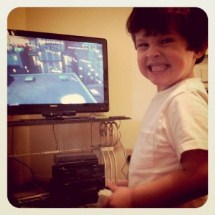 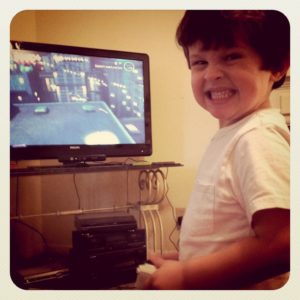 Video games have come a long way from when I was growing up.

I can still remember playing Pong on our black-and-white television in the kitchen when I was five years old. (I feel like I should be waving a cane as I read back over those words.) I also remember when my brother got an Atari for Christmas, and the many hours of Asteroid, Frogger, Combat, and my favorite, a castle and dragon game called Adventure, that followed. (And OMG, I just discovered that you can play Adventure at Atari.com. SQUEE!)

When I was 12, I scored a Nintendo 64. Many happy hours of playing Zelda and Super Mario Brothers ensued. And my mom, I’m sure, suffered at least some degree of guilt… because when I got a new game, like any good gamer, I spent hours in front of the television, which wasn’t good for me or for any of my friends who did the very same thing. As a result of all that video game playing (not to mention the advent of the Internet) much of my generation emerged into adulthood as pasty, bloated creatures with bad vision and a penchant for Cheetos. The cause? Too much time in front of television and computer screens.

Now that so many of Atari and Nintendo’s earliest fans are parents themselves, it’s safe to say that they don’t want their own children to follow down that same path of too much screen time. But I have to say that my kids’ video gaming experience is utterly different from mine. For one thing, almost all of the games they love to play allow for, or even depend on, two or more players, turning video games into family bonding time and a continual exercise in cooperation. Even better, our Xbox Kinect and Nintendo Wii ensure that my kids stay active while they’re playing video games. Where once video gaming meant sitting like a lump for hours on end, my children get to dance, play baseball, volleyball, tennis, run through obstacle courses, go bobsledding, do yoga, train pets and play in a rock band. Particularly during the cold weather months, our video game systems open up a world of opportunities and make fitness fun.

I’m certainly not an advocate of exclusively replacing exercise with a video game system. We limit our kids’ gaming to an hour a day and make sure that they spend plenty of time during the cold weather months playing outside with friends, attending kids’ fitness classes at the YMCA and going on winter nature hikes at our local park. But I am very grateful that the gaming experience is so different from when I was a kid. It’s one less thing I have to worry about as a parent.

Lindsay Ferrier is an Emmy award-winning journalist who found a new career as a blogger (Suburban Turmoil) after having children. She now has two stepdaughters in college, a 4-year-old boy and seven-year-old girl.